The 8th Novembre 2017, GP Bullhound presented for the 3rd year, its survey about TITANS of TECH 2017. This well-documented document is available on the site GP-Bullhound.

The purpose of this survey is to give a clear visibility about European Tech Companies health from a financial performance perspective. The aim is also to detect the eventual shift from a Unicorn Status to a Titan one.

In Fact, the study highlights the definition of Titan. To be a Titan, you must have external growth completed by investment in capital from Funds.

Furthermore, you have to be an indisputable leader in your market. You need to have quickly grown to a valuation over 50 billion dollars. Of course this company must be “WorldWide”.

For the time being, Our first 3 Europeans, Delivery Hero, Spotify and Zalando have raised over $ 1.8 billion and made 12 acquisitions to date. But they can not define themselves as Titan. These companies can reach so far, over $ 10 billion.

We are far from companies like Facebook, Tesla or Uber. Each one has an estimated value of more than $ 50 billion.

The Titans of Tech Study 2017, pinpoints the fact that it is necessary for the European leaders to increase their capital opening. This in order, to compete with the average raised funds in Asia or in the US which is five times higher than what is done in Europe. 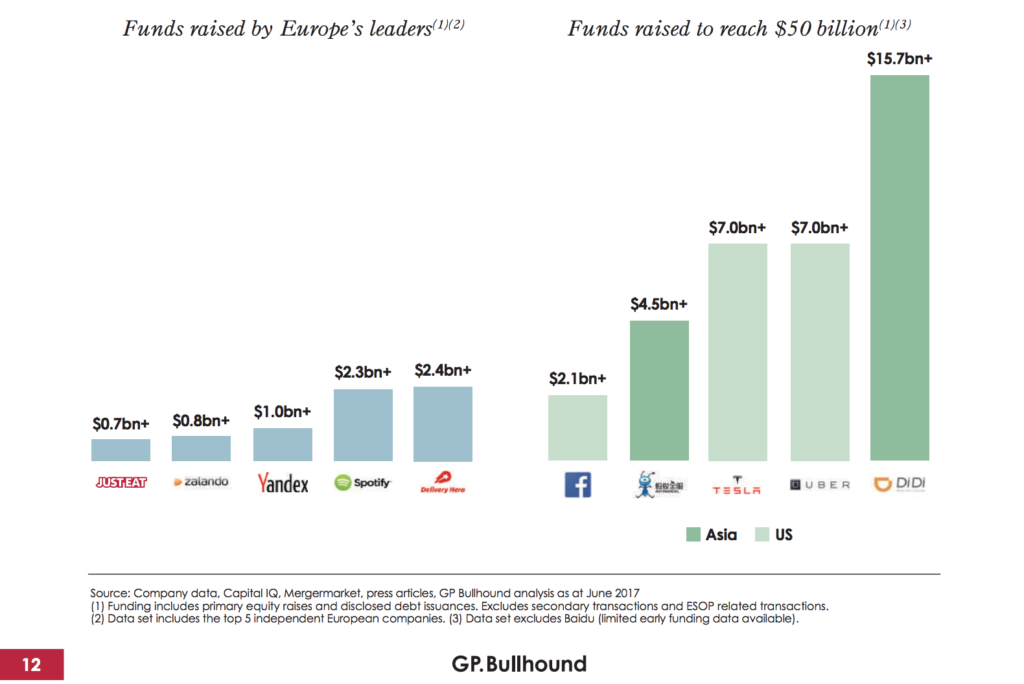 In this study, we can see that Spotify, Zalando and Supercell are the European Companies whose valuation is over $ 10 Billion..

According GP Bullhound, Which companies are growing strongly ?

According to the study, over the last 17 years, 57 companies valued over $ 1 billion each, have allowed a better attractiveness for investments.

The growth of their trust sympathy has been fostered by a track proven expertise and the ability to attract new talent.

From these 57 large companies, 72% are already profitable, this is the case for CRITEO, XING or SUPERCELL.

The other 28% are unprofitable so far. But their growth suggests a CAGR (Compound Annual Growth Rate) at 103%, 2 times higher than those above stated.

The companies to follow in this 28% are represented by 15 companies like BLA BLA CAR, ROCKET INTERNET, or TRIVAGO.

You Want to know more ? You want to discover the Start-ups World ? We invite you to request the Titans of Tech study directly on the GP BullHound website. Of course we welcome you join us and discuss with future French unicorns by registering at START-UP GOLF CHALLENGE .